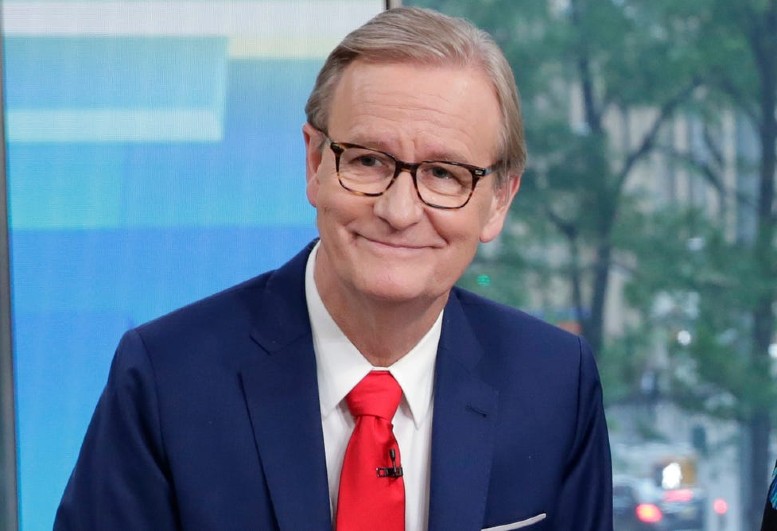 Steve Doocy is a widely recognized host of Fox & Friends and various other news channels. He is famous for his long and strenuous effort for the world of journalism. Read this to know Steve Doocy’s salary and net worth.

Achieving various accolades throughout Steve’s career has cemented him as one of the accomplished journalists of all time. Moreover, former President Donald Trump ranked Steve’s loyalty to this field as 12 on a scale of 1 to 10.

Besides this, people also admire Steve’s dedication to his one and only lover, who recently made the headlines due to an illness.

Steve, the popular host of FOX & Friends, is happily married to his wife, Kathy Gerrity Doocy. Kathy is a former actress and model during the ’60s. However, Kathy gained recognition ever since associating herself with Steve Doocy.

What’s interesting about Steve’s marriage is that it has been over three decades of their marriage without any signs of splitting. Indeed, Steve and Kathy are prime examples of true love. Kathy and Steve are also the authors of The Happy Cookbook, which has its own emotional story discussed later.

Steve Doocy and His Wife Kathy Doocy Met on the Set of WRC-TV in Washington, DC

It was the time when Steve was making it big in his career. He was involved with a junior crew of WRC-TV, while Kathy had the responsibility of handling sports.

Since Kathy and Steve spent a considerable amount of time on the set, they became good friends initially. Somewhere, Steve and Kathy knew that they were meant to be together. It wasn’t until Kathy invited Steve for a glass of champagne that their relationship began officially.

Eventually, when they were dating at The Palm restaurant in DC, Steve mustered up the courage to propose to Kathy. Without a doubt, Kathy accepted Steve’s proposal and got married.

Kathy and her husband got a scare back in 2015. It was when the doctor identified a tumor on the back of her eyes. This all began when the Doocy family was planning a vacation to Florida. Kathy had only gone to buy a pair of sunglasses when the eye specialist spotted freckles on her eyes. To be sure, the specialist advised her to visit a retinal specialist.

Steve’s wife did so after returning from the vacation. After facing many struggles on the way to the retinal specialist in Philadelphia, Steve and his wife got a report confirming that Kathy Doocy had eye disease ocular melanoma.

Fortunately, it was treatable thanks to a medical procedure known as radioactive plaque therapy. For five days straight, Kathy had to visit the hospital for this therapy. Now, she has recovered from cancer though she has to make routine follow-ups.

Kathy was worried about her children the entire time. Had anything happen to Kathy Gerrity, she would not have been able to make home-cooked meals that her children love dearly. This is why she created a cookbook, The Happy Cookbook, containing the recipe of her cookings. Originally, Kathy made it for her children, but then the Doocy family put the book online.

According to Glassdoor, a typical journalist earns a salary of anywhere between $77,225 and $95,076. Given that Steve has contributed to journalism for over three decades, his earnings should be higher.

Steve Doocy is a prominent news reporter and host of several news stations, including CBS-TV, WCBS-TV, and FOX & Friends. As of 2021, Steve Doocy has amassed a net worth of $11 Million.

Steve and Kathy have three children altogether. The first child in the Doocy family was a son named Peter Doocy. Peter is an assignment reporter at Fox News who was born on July 21, 1987.

Likewise, the Doocy family has two daughters, namely Mary and Sally. Mary Doocy, the eldest daughter, is a senior consultant at House Oversight Committee. Mary’s date of birth is in November 1989. Likewise, the youngest child in the Doocy family is Sally, born in July 1993. Sally is an integrated sales planner and marketer at Fox News. Sally Doocy is married to Ali Sadri.

Many call the Doocys a family that is knit tightly. When Kathy Gerrity was undergoing eye therapy, Steve and his children living and working in different states came to Philadelphia to stay with their mother until she healed up. Then, the family sat together for their traditional family meal.