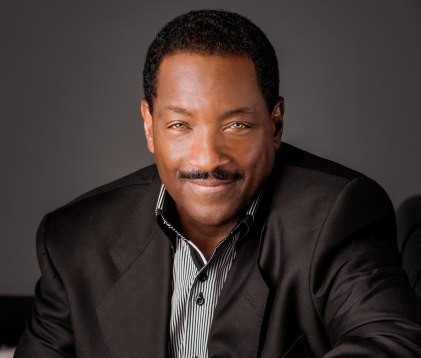 Donnie Simpson is an American DJ, TV personality, and actor. He is the long-standing host of The Donnie Simpson Show on the Washington, D.C. radio station WMMJ-FM.

Married to His Wife, Pam Simpson, Since 1973

Donnie Simpson has been married for close to 48 years to his wife, Pamela Gibson. They tied the knot on October 13, 1973, after dating for two years.

On May 23, 2021, Donnie penned a sweet tribute to Pam on his Instagram. Coinciding with the silver jubilee of their first date, Donnie began by writing,

Today is a very special day in my life. It was 50 years ago today that I asked Pam to “Go with me.” I didn’t know where we were going and I’m not sure we’re there yet, but I do know that I’ve loved the journey.

Furthermore, Donnie went on to explain the weight the date carries, saying,

It’s funny but to me, this is bigger than a wedding anniversary. When you’ve been going together for a while you kinda know where things are going…Marriage. I had no such certainties when I asked her to be my girlfriend. And that’s the true beginning.

I Love you Boo and I hope we can go whether for another 50.

Donnie and Pam have two children together, a son named Donnie Simpson, Jr., and a daughter named Dawn Simpson. Donnie Jr. was a once-aspiring producer at WPGC-FM while his father was working there. However, Donnie Jr. followed his own path and became a pastry chef. He currently owns and operates Uprising Muffin Co. in Washington, D.C.

On the other hand, Dawn Simpson is a grade school teacher.

Both Donnie Jr. and Dawn married outside of their ethnic background and have non-black spouses. Furthermore, Donnie Sr. and Pam have four grandchildren, two born to each of their two children.

Even the most ardent of Donnie’s fans might not know that he has a twin brother named Lonnie. The lesser-known of the two, Lonnie and Donnie, share the same birthday but have little else in common.

Lonnie Simpson is reportedly a preacher. Despite the twin brothers having followed different careers, they still have a good relationship, as apparent from Donnie’s birthday wish to his twin brother.

My twin brother Lonnie is the greatest person I have ever met! Any situation he faces gives him one way to react.

Besides Lonnie, Donnie has four other siblings, including Calvin Jr., a record store owner, and Harry, a Detroit-based DJ.

According to CelebrityNetWorth.com, Donnie Simpson has a net worth of $5 million. Donnie is the non-syndicated radio host to cross the $1 million annual salary hallmark. Furthermore, he is also the most commercially successful African-American radio host to make it without syndication.

In 2003, signed one of the biggest deals made by an African-American radio personality outside of syndication deals. Donnie signed a six-year contract for a reported eight figures with the Maryland-based radio station WPGC-FM.

Donnie Simpson was born to record shop owners Dorothy and Calvin Simpson on January 30, 1954. A native of Detroit, Michigan, the 67-year-old began his career at the age of 15.

His first professional gig was a stint at Detroit’s WJLB radio station. He spent the next seven years at the hip-hop and R&B station before moving to the nation’s capital in 1977.

Subsequently, Simpson landed a gig at D.C.’s WRC-FM (now, WKYS-FM). His stint at WRC carried him through the next decade and a half of his life. While at WRC, Simpson made his television debut in 1981 for WRC-TV. His first on-screen gig was as a backup anchor on the “George Michael Sports Machine” show.

Eventually, Simpson left his job at WRC and joined WPGC-FM in 1993. At the station, Simpson hosted The Donnie Simpson Morning Show for 17 years, from March 1993 to January 2010.

In 2010, Donnie announced that he had retired. Following a five-year hiatus, Donnie returned to broadcasting for the D.C.-based radio station, WMMJ-FM. Since then, he has been with the station, where he currently hosts The Donnie Simpson Show.

Furthermore, Donnie has plans to start a podcast series with the Donnie Simpson Podcast Network (DSPN). His goal with the podcast is to interview A-List celebrities to discuss a wide range of topics, including music and politics and everything in between.

Donnie is a member of the American Association of Retired Persons (AARP), a coalition for the benefit of people over the age of 50.