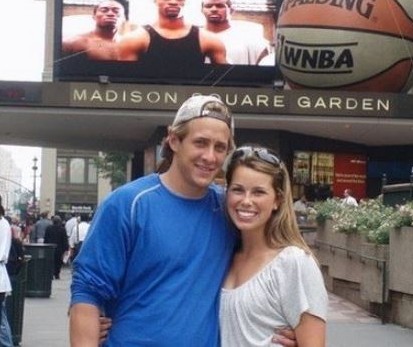 Being an athlete, Matt has always put hockey in front of anything else. In return, Matt is now worth millions. But, as of now, Matt Gilroy is enjoying a serene life with his only wife.

Who is Matt Gilroy?

Matt’s love for hockey began grooming ever since his college days. In his college, Matt joined a Boston University Men’s Ice Hockey Team which won the National Championship in 2009.

Since then, Matt has signed with different teams and played hundreds of games. It was till the 2013-14 season that Matt played in the American hockey league. Then, Matt began playing for Russian, German, and Swiss associations in the Kontinental Hockey League with an ice field of 15 feet wider than the one in his country.

As of 2020, Matt Gilroy is a Harvard business graduate.

Who is Matt Gilroy’s Wife?

Matt Gilroy came to the limelight for tying the knot with Fox’s sports reporter, Jenny Taft. This journalist also happens to be the daughter of John Taft, a former defender for the 1976 U.S. Olympic team.

Watching her father play sports made Jenny interested in sports as well. During her college, Jenny used to play lacrosse. Though Jenny is not a player now, she covers exciting game news and updates on TV for the fans.

Moreover, being a Fox Sports reporter, Jenny has a busy schedule. She is often seen on the sidelines during the games and taking interviews in significant college football games. In her eight-year-long service in the Fox Sports network, Jenny has reported MotoGP and the 2015 FIFA Women World Cup.

How Did Jenny and Her Husband Matt Gilroy Meet?

Matt and Jenny were college lovebirds as both met while studying at Boston University. As luck would have it, Matt and Jenny were interested in sports and became close due to their common liking. Matt belonged to the class batch of ’09, whereas Jenny was of ’10.

Despite the distance, Matt and Jenny took out time to get married. The once freshman couple tied the knot in 2015.

However, looking at their relationship, one could not call them an average couple. Given that Matt and Jenny were busy in their respective careers, they hardly had any time to be together.

Jenny said that her relationship with Matt was long-distance, especially since her husband Matt Gilroy went to play abroad. Moreover, Jenny and Matt have not had the time to go on honeymoon either.

Nonetheless, Jenny often travels to Europe whenever she gets free time to see her husband play.

In Matt Gilroy’s six-year-long marriage with Jenny, he has not had any child yet, understandably so as neither of them is free with their careers.

Matt Gilroy has a fortune of $2 million as of 2021. Matt’s only source of income is his outstanding career as a hockey player. When Matt signed a two-year contract with the New York Rangers, he bagged in a total of $3.5-million for the duration of his time.

One reason Matt joined KHL was its high paycheck and the freedom to participate in Olympics. An average KHL player earns $1 million, with the minimum being $700k.

Being an athlete, Jenny’s husband Matt Gilroy has a lean and muscular body. Matt stands tall at 6 feet and 1 inch. Likewise, the Rapperswil-Jona Lakers player weighs 201 lbs. Matt’s playing position is as an attacking defender.