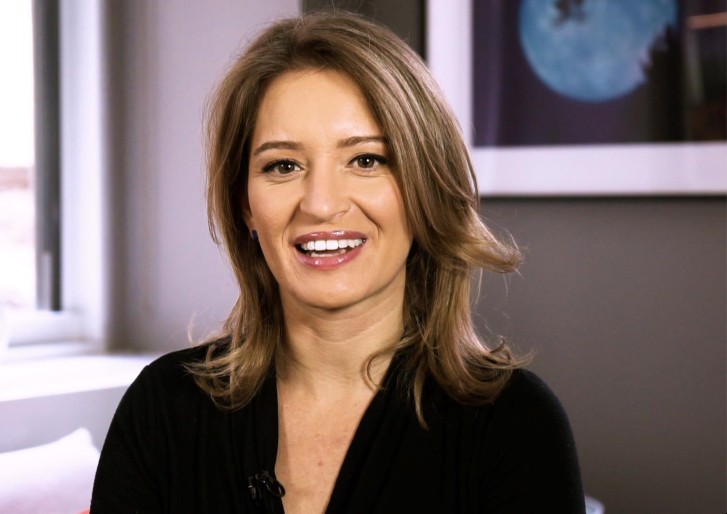 Katy Tur is an American broadcast journalist, author, and one of the lead anchors on MSNBC Live. Moreover, the daughter of transgender journalist Zoey Sur, Katy is the author of the best-selling book Unbelievable.

Who is Katy Tur?

Katy Tur was born and raised in Los Angeles, California. With both her parents as journalists, Katy knew early on what she wanted to pursue. Her journey began at Brentwood School in her hometown.

After graduating in 2001, Katy pursued a degree in philosophy from the University of California, Santa Barbara. She subsequently earned her B.A. in 2005.

Immediately out of college, Katy began working as a reporter at The C.W.’s L.A. affiliate, KWLA (channel 5). Yet, she left after a year and subsequently moved to New York.

In August 2009, Katy Tur joined WNBC-TV, NBC’s local N.Y. affiliate T.V. station. Meanwhile, Katy built a strong portfolio as a reporter during the next three years she was reporting there.

Her hard work ultimately paid off when she was promoted to the flagship network in September 2012. Since then, Katy has been a prominent fixture at NBC and contributed to various shows on the network, including Early Today, the Today show, Meet the Press, and NBC Nightly News. Currently, Katy is one of the lead anchors on MSNBC Live, NBC’s flagship news program.

Katy reported on behalf of NBC during Donald Trump’s bid for Presidency in 2016. She was in the trenches with Trump during his campaign through 2016. Furthermore, Katy brought him to task on some of his disparaging remarks about a host of different topics, including women, equality, and race.

Subsequently, she chronicled her experiences with Trump and his supporters in her 2017 book, Unbelievable: My Front-Row Seat to the Craziest Campaign in American History. Additionally, her book spent several weeks atop the New York Times bestsellers list.

According to CelebrityNetWorth.com, Katy Tur has a net worth of $4 million with an annual salary of $1 million.

Indeed, Katy is a veteran reporter and journalist with over 15 years of experience. From local T.V. stations to one of the most extensive networks in America, Katy’s rise to the top of broadcast journalism has been nothing short of meteoric.

In comparison, Katy’s husband Tony has an estimated net worth of around $400 thousand.

Who is Katy Tur Father?

Katy has a troubled relationship with her father, Zoey Tur. Zoey Tur, born Robert Tur on June 8, 1960, is an Emmy Award-winning broadcast reporter and commercial pilot. He was married for 23 years, from 1980 to 2003, to the reporter Marika Gerrard, who was also his business partner.

Robert pioneered Los Angeles News Service with his then-wife Marika. The service was the first to break the news aboard an AStar helicopter. Thus, they had a bird’s eye view of major cities and could report on incidents from a safe distance. In that regard, they were able to go where others dare not.

They were the first to broadcast the O.J. Simpson slow-speed chase in 1994. For their Avant Garde reporting, Robert and Marika received several industry awards, including three Television News Emmys.

Robert made headlines in June 2013 when he came out as transgender. He underwent gender transition surgery in June 2014 following 14 months of hormone therapy. Robert legally changed his name to Zoey and gender to female.

Talking to People magazine in February 2015, Zoey opened up about her struggles after coming out as transgender. Besides essentially being blackballed and told she would “never work again,” the most significant personal blow was her daughter’s estrangement.

In the interview, Zoey said:

“My son was great, he told me, ‘I support your decision and if this will make you happy then I’m on board,’ but my daughter was shocked. She had a great deal of difficulty and we stopped talking for a long time.”

On the contrary, Katy spoke about her estrangement from her father, saying that they were not on speaking terms for a while but that it had nothing to do with Zoey’s transition.

Nonetheless, they have since reconciled. The turning point was Zoey’s three-episode special that aired on Inside Edition in 2015, which chronicled her entire transformation. After the specials aired, Zoey received a note from Katy congratulating her.

“My daughter found out about it and sent me a nice note saying congrats on the job and told me that I look beautiful, which meant a lot.”

Previously, Tur dated Keith Olbermann, a sports/political commentator for MSNBC, for three years from 2006 to 2009.

On April 13, 2019, Tur gave birth to her first child with Tony, a son named Theodore “Teddy” Dokoupil. In January 2021, Page Six first broke the news that Katy was pregnant with her second child. She confirmed the news on-air on MSNBC Live later that month.

Subsequently, Katy gave birth to her daughter Eloise Judy Bear Dokoupil on May 13, 2021. Besides their two children, Katy Tur is a stepmother to Doukoupil’s two children from a previous marriage.

Katy Tur was born Katharine Bear Tur on October 26, 1983, to Zoey Tur (née Robert Tur) and Marika Gerrard. At the time of this writing, Katy is 37 years old.

She is one of two children and the only daughter of her parents. Likewise, her brother is James Tur.

Katy has not spoken out forthright about what religion she subscribes to. However, she does come from a family with Jewish origins.

Nevertheless, Katy has not endorsed or rejected her Jewish roots. Furthermore, her works and accomplishments feature in several Jewish publications, including JewishContributions.com, JewishJournal.com, etc.