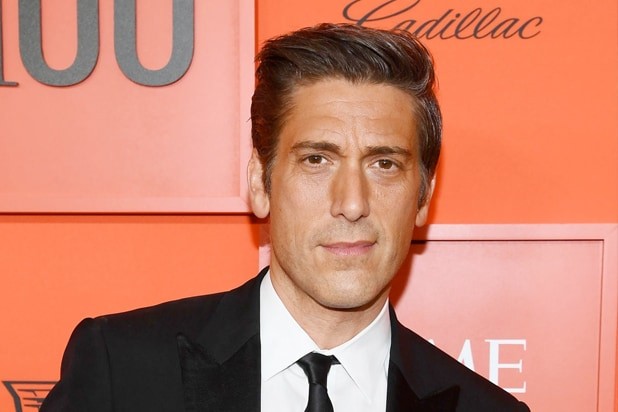 New York-native David Muir’s birth name is Jason Muir. He was born on November 8, 1973, so, his age as of now is 48 years old. David Muir’s parents’ names are Pat and Ronald Muir. He grew with 3 siblings.

Muir has been on the flagship ABC News network since 2003, having cut his teeth at ABC’s Boston affiliate, WCVB, for three years.

During his tenure at ABC News, David has covered a host of national and international news stories, including Hurricane Katrina, the Israeli-Lebanon border conflict, the Fukushima nuclear plant meltdown, and the 2012 U.S. Presidential election, to name a few.

Among his 18 nominations, David has won four News & Documentary Emmy Awards. Additionally, he has also won a Writers Guild of America Award in 2009.

David Muir has an annual salary of $5 million per year. He is a tenured journalist and reporter at ABC News with nearly 18 years on the flagship network. Through tenure alone, Muir is probably one of the highest-paid employees at ABC News.

Not to mention, his newscast, “World News Tonight,” is the most-watched newscast in the history of US television, spending 11 consecutive weeks at #1 on cable television. Muir routinely pulls in over 10 million households, 2 million more than the show’s nearest competitor.

Therefore, it is conceivable that Muir makes more than your average Joe at ABC.

In 2020, CelebrityNetWorth.com placed David Muir’s net worth at $20 million. So naturally, his current wealth supposedly is even greater, especially considering he had only recently dropped $7 million on a second home.

In late 2019, David purchased a second home in Skaneateles Lake, New York, which marks his second home in the affluent town. The property, which serves as his vacation home, reportedly set him back $7 million. On why he bought the 1800s house, David said it was so he could “save a historic home.”

Standing atop 6 acres of prime NY real estate, the home itself measures 4,300 square feet. According to reports, David Muir’s house has six bedrooms and three bathrooms. Furthermore, the house has two kitchens and a central fireplace.

Additionally, Muir also spent a semester at Georgetown University. For his further education, he joined the University of Salamanca and did an additional semester there.

David’s first on-the-job experience was as an intern at WTVH-TV, CBS’s Syracuse, NY affiliate. But, even at the local station, David’s work earned him widespread acclaim.

In 2003, David was promoted to the ABC News network, where he has worked since.