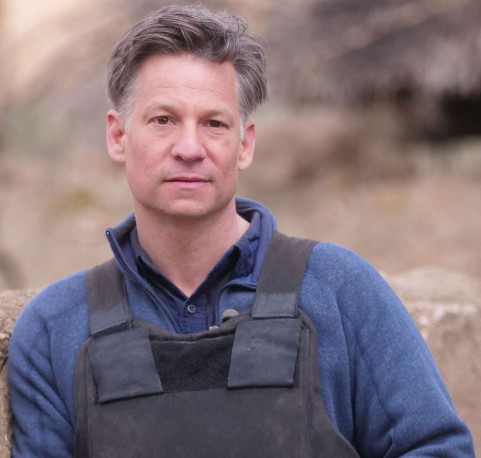 Richard Engel is a NBC news correspondent and writer who hails from New York. He was born on September 16th, 1973, making him 47 as we speak. Over the years, he wrote multiple books. These include popular titles like Defeating Isis (2016), War Journal (2008), and A Fist in the Hornet’s Nest (2004).

Likewise, Richard’s credentials include a stint at the prestigious Stanford University. Recently, Engel has been quite vocal in covering the unrest in Jerusalem.

So, here is everything on Richard Engel’s wife, Mary, his net worth and salary.

Who is Richard Engel?

Richard Engel is a journalist who works for NBC. Moreover, he is the network’s primary foreign correspondent. After more than two decades of covering political transitions, wars, and even revolutions in some cases, Engel is considered the very best in the business. Upon graduating in the mid-90s, Richard decided to make the surprising move to Northern Africa, settling in Egypt.

His concise mind strongly believed that Cairo was where the next significant story would come from. While living in Egypt, Richard became very fluent in Arabic, which, proved very useful once he switched his focus to the Middle East.

The early 2000s marked a monumental phase in Richard’s career. He was the only American correspondent to remain behind and cover the Baghdad War. Engel was even present during the trial and subsequent execution of Saddam Hussein. Later on, he’d even cover the war in Afghanistan.

By 2008, Richard was already with NBC News. His time on the network saw him appear on several different news programs. These include shows like NBC Nightly News, Dateline, and Meet the Press. Richard’s career in journalism has not gone without recognition. He has received prizes like the Edward R. Murrow Award, the Peabody Award, and the John Chancellor Award for Excellence in Journalism.

Richard married a woman named Mary Forrest. Reports suggest that the two walked down the aisle back on May 29th, 2015. As of 2021, they are together for six years. Their first child, Henry, was born the very same year his parents tied the knot. When Henry was just two years old, his doctor diagnosed him with a type of Rett Syndrome.

This is a rare condition that affects the brain and also results in the inability to walk or talk. Both Richard and Mary have spent a considerable amount of time working with their son to progress his fine motor skills.

The couple’s second son, Theo, was born in 2019 and is set to turn two years old this year. In an interview last year, Richard talked about how conflicting it was for him to watch his son Theo walk, knowing fully well that Henry might never get to.

Before Mary, he was married to a former Stanford student but they split later in 2005.

Who is Mary Forrest?

Richard Engel’s better half, Mary Forrest is a 44-year old television producer who worked for popular series like The Martha Stewart Show. In fact, she met her husband in this show in 2010 when they invited Engel to the show as a guest.

Mary’s social media activity additionally revealed that she was not a fan of the former POTUS, Donald Trump. In fact, she regularly criticized him on Twitter every time he made a controversial decision.

Richard’s income and subsequent net worth have mostly come from his decorated news career. On average, it is estimated that NBC correspondents make around $79,000 every year, with a $6,000 bonus to boot. For someone with Engel’s vast experience, this figure reportedly rises to about $200,000.

In addition to his exploits in journalism, Richard also enjoys a good income as revenue from his critically acclaimed books. War Journal, for instance, retails for about $15 on Amazon. His other book, Defeating Isis, is available for $20 on hard copy. As of 2021, Richard Engel’s net worth is $1.5 million.