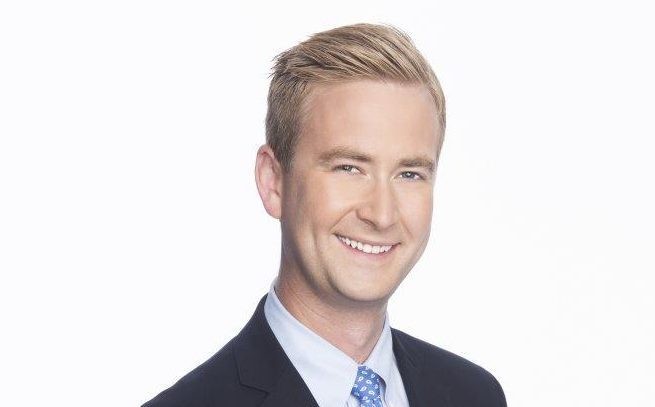 Peter Doocy is a 33-year old journalist who currently works for the Fox News Network. Moreover, he works as the network’s White House correspondent. This is remarkable, especially when you consider that he was just a general assignment journalist when he signed on to Fox back in 2009. Know Peter Doocy’s sexuality and partner here.

Interestingly, Peter was trending back in March after President Biden’s first press conference, but not for the reasons you’d think. His network ran with the story that the White House had intentionally ignored. So is Peter Doocy gay or straight? Let’s find out.

Peter Doocy Is Not Gay.

Doocy is straight, as far as his sexual orientation is concerned. So how did these rumors start? For starters, back in November 2013, Peter Tweeted about the gay marriage legislation act that was passed in Hawaii.

Despite working with Fox News, a network strongly linked to the Republican Party, Peter’s view on the subject seemed encouraging. As such, his support began to raise a few eyebrows. The fact that he kept his personal life private at the time also did not help matters. Doocy is 6 ft 5, with a great head of hair.

It is the kind of look that would have most women lining up in a single file. And yet, he never talked about a significant other back then, which led some to believe that he must be in the closet.

Peter Doocy Is Married To a Wife.

Peter Doocy is married to a woman named Hillary Vaughn. Like Peter his better half, Hillary is also a news correspondent who works for Fox News. Sources say that Hillary has worked all over the country, venturing to places like Tampa, Detroit, Chicago, and even Washington DC. Reports suggest that Peter and Hillary dated for at least four years before they decided to take the next step.

This is evident from a post that dates back to 2017 when the camera captured them at the Villanova March Madness match.

Peter Doocy and his spouse Hillary Vaughn tied the knot back in April 2021 in Palmetto Bluff, South Carolina. The ceremony was among the close circle, with only about 18 people in attendance. This was down to COVID 19 regulations and concerns. Additionally, the venue of the wedding was the prestigious Montage resort.