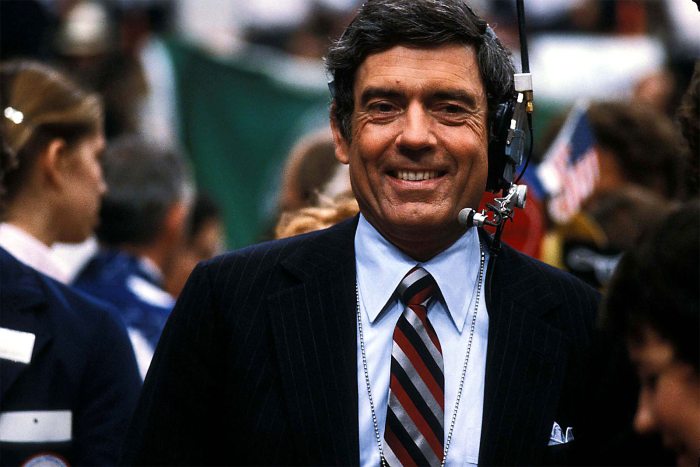 Dan Rather, or Daniel, is the former evening news anchor and a journalist. He became popular in the journalism world when he helped save thousands of lives in the Hurricane Carla of 1961. His live reporting helped save all those lives. Read to know Dan Rather’s age and net worth. Mee his wife Jean Goebel.

Rather is also the creator of the radar weather report. He did this by placing a transparent map over the radar image of the hurricane. By doing this, he was able to indicate the areas on the map that the hurricane will hard hit. His map helped in the pre-emptive evacuation of more than 300,000 people, thus saving their lives.

Dan Rather was born Dan Rather Jr. on the 31st of October, 1931. His birthplace is Wharton Country, Texas. Dan’s father, Daniel Irvin Rather Sr., had a lowly job as a ditch digger. His mother was Byrl Veda Page. The Rather family relocated to Houston when Dan was a small boy.

He finished high school in 1950 at the John H. Reagan High School. Later on, Rather finished his journalism degree at the Sam Houston State Teachers College in 1953. Rather was the editor of The Houstonian, the school paper. As a college student, he also worked at the KSAM-FM radio station, covering high school and state football games.

In 1963, Dan Rather reported live during the assassination of President Kennedy. His exemplary reporting of the tragic event got him promoted to White House correspondent on CBS News.

Later he was assigned to Vietnam and London. Two years later, he was reassigned to the White House, covering the Richard Nixon administration. Rather reported the events surrounding the Watergate controversy and the inevitable resignation of Nixon.

Dan Rather became the CBS Evening News anchor in 1981, where he stayed for 24 years. He was also a contributor on 60 Minutes, the weekly CBS news magazine. In 2005, Rather was forced to leave his news anchor position after getting involved in the Killian documents scandal.

CBS accused him of presenting unsubstantiated files while reporting on the Vietnam war under the George W. Bush administration. Eventually, CBS fired him in 2006. He filed a lawsuit against the network, but he lost.

He moved on to AXS TV, where he hosted the show Dan Rather Reports from 2006 to 2013. In addition, he also hosts the Dan Rather Presents, which discusses various topics relevant to society.

His other shown on AXS TV is The Big Interview with Dan Rather, where he has in-depth conversations with celebrities and musicians.

In 2018 he debuted his online news show entitled The News with Dan Rather, which is shown on the Youtube channel, The Young Turks.

Dan Rather Net Worth

According to celebrity net worth, the net worth of Dan Rather is $70 million as of 2021. The veteran journalist has been involved in a scandal where society questioned his integrity as a journalist.

And yet, he was still able to recoup and recover. His income source is primarily from his work as a journalist. He has several shows on television and Youtube. Rather is also an accomplished author and earns from the numerous books he has written.

How old is Dan Rather?

Dan Rather was born on the 31st of October, 1931, which puts him at 89 years old as of 2021. He will be commemorating his 90th natal day this year. Despite his advanced age, Rather is still very active in his career. He has no plans of resting on his laurels, even if he achieved so much in his career.

With the way he is going, it will not be surprising if he works for a few more years. Dan Rather is still very agile and sharp for someone who is almost 90 years old. When asked if he has any retirement plans, his answer is a big and resounding NO. There is no stopping a man as dedicated to his work as Dan Rather.

Dan Rather not only has a successful career but a successful family life as well. He married his wife Jean Goebel in 1957, and they have been together since then. The veteran journalist has been together with his wife for 64 incredible years. That in itself is an achievement.

Dan and Jean have two children who both have outstanding careers. Their daughter Robin Rather is a community activist and environmentalist. On the other hand, their son Danjack is an assistant district attorney based in Manhattan.

Dan Rather has written several books in his career. Income from book sales is a considerable portion of Dan Rather’s net worth.

Is Dan Rather Still Alive?

Dan Rather is very much alive. People can still see him on his shows on AXS TV as well as on his Youtube newscast. The veteran journalist is in good health and has, in fact, just released his latest book. Rather is currently on the 8th season of his popular show The Big Interview with Dan Rather.

Although he spent some time quarantined in his New York home during the height of the pandemic, Rather is still very active in his shows. He recently joined Twitter and has been quite active on it. Surprisingly, he finds Twitter very entertaining as he expresses his opinions on the latest events happening in the country. He also uses Twitter for more dynamic interaction with his fans.