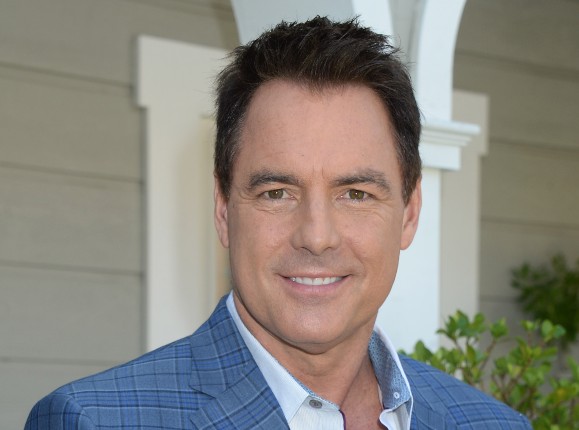 Mark Steines is a two-time Emmy Award and Golden Mike Award-winning journalist and actor from Los Angeles, California. He is most famous for hosting Entertainment Tonight on CBS and Home and Family on the Hallmark Channel.

The broadcaster is also an actor and a proud father of three who recently welcomed his baby daughter named Parker Rose. But before we start ranting on the newborn, why don’t we first introduce you to her mother. Here’s everything we have on Mark Steines’s wife, Julie Freyermuth Steines, including her net worth.

‘Out with the old and in with the new’ is a common phrase that worked all too well in Mark Stein’s life. It touched on both his career as well as his personal life. After serving as the host for Entertainment Tonight for 17 years, he ended his contract in 2012 to pursue other opportunities. The wind finally blew him to hosting Hallmark Channel’s TV series, Home & Family with Paige Davis.

Shortly after, he interacted with a woman named Julie Freyermuth as a guest on the show in August 2015. He approached her when the cameras weren’t rolling, and after a few dates, they started dating unbeknownst to his fans.

A year later, he made the reveal by inviting close family and friends of over 110 people to his wedding ceremony at his LA home. On August 20th, 2016, Mark Steins and Julie Steins married in 2016 in a beautiful ceremony.

The newlywed couple welcomed their daughter, Parker Rose, a short of a year later, on July 28th, 2017. They now live with their dogs, Nobert and Fred, a golden retriever, and Mark Steines’ two sons, Kai Harper and Avery James, from his previous relationship.

Julie Steines is Mark’s second wife. Steines’ first marriage was to the late Eva Leanza Cornett, who recently died in October 2020, following a head injury after falling in her Jacksonville home. She was the host on Entertainment Tonight, where they seemingly met and wedded for 17 years, just around the same time Mark’s tenure at CBS lasted.

Back to Mark Steines’ wife, Julie Dawn Freyermuth Steines is an award-winning author, philanthropist, and yoga enthusiast. On October 10th, 1979, she was born in Carver, Massachusetts, to her father, Richard, and mother, Virginia Freyermuth, from whom she derives all her inspirations.

Virginia is also an author, teacher, and artist who currently holds a Masters in Fine Arts degree in painting. She also a Ph.D. holder in Interdisciplinary Studies majoring in Art Education. Julie has an older brother named Jeff Freyermuth. Upon growing up, she attended the Ohio Wesleyan University as part of the Phi Beta Kappa Society to mold her career.

Mark Steines wife combined her passion for literature, pets, and children to make something for herself. She co-owns a printing press with her mother and has authored several series of books. Nobert, in particular, has won her nine prestigious international and national awards.

As a result, the mother of one has grown to reach a worldwide audience, with the help of her YouTube channel as well. She’s appeared on several television shows such as The Today Show, Pickler & Ben, The Doctors, and many more. From all this, Julie Freyermuth Steines’ net worth culminates to about $1 million.

Mark Steines Net Worth and Salary.

As you already know, Mark Steines’s net worth links to previous jobs as a television host. However, did you know that he earned a good amount as a journalist on KWWL-TV, KSPR, and KCAL-TV in Los Angeles?

When he was let go from Home & Family in June 2018, many people thought it was because the network couldn’t afford him. It turns out that it was an executive decision to replace him as a cohost.

Nonetheless, the former ET host bounced back on KTLA by covering the Tournament of Roses Parade. As a result, Mark Steines net worth draws to about $20 million when combined with that of his wife, Julie. Some of it also accredited to his numerous roles in films such as Nixon, CSI: NY, and his most recent A Rose For Christmas.