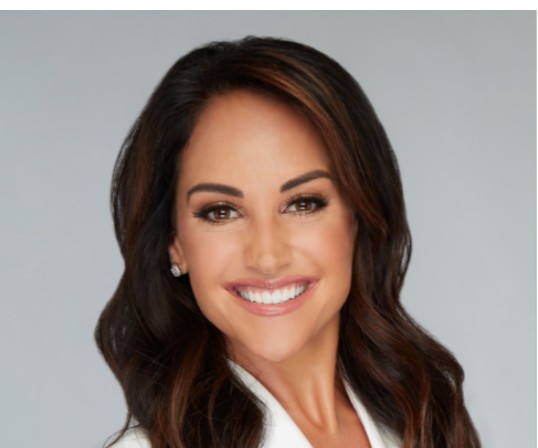 Emily Compagno is a former attorney who found her way into Fox News as a contributor. Fans recognize Emily Compagno as one of the cast members from Outnumbered and The Five. While Emily’s career path may seem unusual, but in her words, it is perfectly natural as she has enjoyed hosting events for a long time. Read this to meet Emily Compagno’s husband Peter Reilly.

Currently, this Fox News host is tasting success alongside her newly married husband. Also, her career as an attorney, cheerleader, and host has made her worth a million.

Emily Compagno originated from East Oakland, California. But Emily grew up in El Cerrito. Compagno was the daughter of John Compagno and Katherine Compagno. Her late great-grandfather was William Harry Bertsch, the recipient of the Silver Star for his bravery in World War I, was Compagno’s great-grandfather.

Compagno is a graduate of the University of Washington with credentials in politics. Likewise, Compagno graduated in mid-2006 from the law school of San Francisco University, where she acquired the Juris doctorate.

Soon after passing the bar exam in California, Compagno got the license to practice at law firms. For years, Compagno served as the criminal defense attorney in her area. Compagno was also the Senior Judge Judicial Extern at the United States appeal courts.

Later, Compagno became the federal attorney at the Social Security Administration and held legal positions worldwide, including in Africa, Cape South, and Brazil.

Compagno’s career took a turn when she captained the Oakland Raiders’ cheerleading team. Then, the NFL chose Compagno to serve as an Ambassador to promote NFL in various countries like China, Iraq, and Kuwait.

Emily Compagno had shrewd analyzing skills. Also, she was familiar with the ins and outs of the NFL. Hence, in 2018, Fox News offered her the position of contributor and analyst. After appearing as a guest and co-host on talk shows, the Fox executives promoted her to host Crimes That Changed America on March 9, 2020. Emily also became the co-host of Outnumbered since January 25, 2021.

At this time of writing, Emily Compagno is a married woman. Her husband is an Account Manager named Pete Riley. Though Emily is loud in front of the camera, she is silent when talking about her married life.

Some sources reveal that Emily met her now-husband during their teen days. Also, both of them studied politics and graduated from the same university. Emily and Pete were only friends back then. But when they crossed paths in 2014 during a Seattle Sidewalk, their love story began.

Since then, Compagno and Riley became closer and decided to exchange wedding vows after dating for four years. Compagno tied the knot with Riley on September 14, 2017. The wedding venue for Compagno’s wedding ceremony took place in her home country of Italy. A day later, Compagno jokingly tweeted her husband leaving his wedding ring in the hotel’s room.

Though Riley and Compagno have kept their married life in the shade, we can assume they live the best life together.

The Fox News host and her husband do not bear any children at the moment. However, Compagno has a Duchess dog whom she treats like her child.

Pete Riley looks to be in his 40’s as of 2021, as his actual date of birth is unknown. Pete Riley is also a graduate of the University of Washington. He joined the university after completing his high school education at the Seattle Preparatory School. Similar to his wife, Riley holds a degree in politics and communications.

After parting ways with Cisco Systems in 2015, Pete joined Palo Alto Networks then Netskope to serve as an Account Manager.

The eldest one is Natalie Compagno, a communications graduate from Southern California University. Currently, Natalie is the Director Of Special Events and marketing at KEVAWORKS, INC.

Likewise, Emily Compagno’s younger sibling is Julietta Compagno Skoog, the co-founder of Sproutable. Unlike her sisters, Julietta focuses on teaching discipline, mindfulness, and socializing to children. Moreover, Julietta is a certified trainer in Positive Discipline with over 15 years of knowledge.

As of 2021, Emily, the former attorney and the co-host of Fox News, enjoys a significant net worth of $1.5 million. Emily spends most of her money on fashioning as she wears designer dresses to the show every day. Likewise, she owns a customized sports car named 1971 Mustang 72 MACH1, whose market value ranges from $20k to $60k.

Similarly, Compagno’s incredible wealth results from her earnings as an attorney, cheerleader, sponsorships, and Fox News host. As of now, Emily Compagno’s salary is $80,000 as the host of Fox’s Outnumbered. Previously, Emily made $100k as an attorney.

Compagno’s body measurement reads that she has a chest size of 34 inches. Likewise, Emily’s waist and hips are 26 inches and 39 inches.

Emily Compagno’s father is John Compagno, the owner of a winemaking company known as Arditi. John is a trained pathologist who specializes in molecular diagnostics. Hence, whatever wine John makes, he thoroughly tests them in the lab to see their edibility. Emily’s father has also taken training from Napa Valley College in Enology as well as Viticulture.

John lives and practices winemaking in a 5-acred vineyard situated in the San Francisco Bay Area. John inherited Italian food and wine culture. Likewise, he followed his parents’ winemaking tradition known as Sicilian. Though the job is manual and physically demanding, Emily’s father has benefitted by selling hundreds of wines.